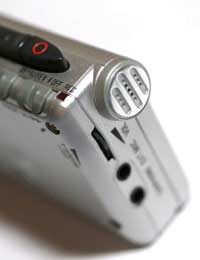 If you want to record the voices of other people without their knowledge then a range of covert voice recorders are now available to help satisfy your undercover pursuits.

As a means for recording business meetings, lectures, interviews or personal ramblings, the voice recorder is an invaluable and widely-used tool. But what about when you don’t want your subjects to know they are being recorded? Perhaps you want to record a sensitive business meeting, an interview, verbal insults to use as evidence, make field recordings of strangers, or simply capture friends and family at their most unguarded.

It is possible to use a traditional voice recorder by concealing it – such as by keeping it in an open pocket or bag - but often this is at the expense of recording clarity, and also it increases the likelihood of your clandestine operations being exposed. Fortunately covert miniature voice recorders are available that are specially designed to produce high quality digital audio recordings with only you being the wiser.

Depending on the type of situation, covert voice recorders come in numerous different disguises, such as a wristwatch, data stick or pen. Each is fully functioning in its perceived role. So, for example you won’t raise any suspicions by wearing a flash looking watch that can’t actually keep time.

Each device saves the audio recording to an in-built flash drive, which can later be downloaded onto a computer. These voice recorders run on an in-built lithium battery that is automatically recharged once the device is connected to the computer.

The data stick voice recorder looks, behaves and functions as a regular storage facility for your computer files. However, this ingenious device serves a secondary, surreptitious purpose as a powerful sound recorder, able to capture clear audio across a radius of up to 20 feet.

With no unusual markings, flashing lights, vibrations or recording noises, the recording function remains entirely inconspicuous. To all intents and purposes it is an ordinary USB stick, but all it takes is a push of a single slide switch to begin hours of completely discreet recording.

The USB stick is an ideal vessel for a covert recorder because in the work environment at least, it is such a ubiquitous device. Nevertheless, the data stick voice recorder is designed to be worn on a key chain so you won’t raise any eyebrows if you have it to hand somewhere away from computers.

One type of covert voice recorder that won’t attract suspicion wherever you are or whatever the situation, is the classic wristwatch design.

Although watches come in all sorts of strange designs featuring all manner of technical gadgetry, and so one that did flash and whir wouldn’t immediately arise suspicion, the covert watch recorder is designed to look and act like a standard watch. As such spy-like activity is typically associated with males, the watch is a bulky masculine design not dissimilar to that worn by James Bond.

The pen voice recorders are currently available in both covert and ‘semi-covert’ designs. Semi-covert means that although they look like a pen, their various buttons and lights mark them out as being a very unusual type of pen. Producing such a spacey-looking device at sensitive business meetings would either attract unwelcome attention and suspicion, or single you out as being a rather eccentric individual.

These devices are not intended to be placed on full view, but rather half concealed in a shirt pocket, in a drawer or in a hand bag, for example. Although they do function effectively as pens their ink is non-replaceable and so should only be used if absolutely necessary.