Home > Crime > What to Remember or Collect if You're Burgled 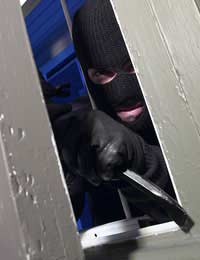 In order to recover from a burglary you must first prepare for it. After you’ve become a victim of a break-in, it will be too late to record serial numbers, take photographs, install locks, or purchase insurance. That said, here’s a bit of advice about what to do when the ugly crime occurs.

Contact the police—without entering the crime scene if possible—and give the address where the burglary took place. If you saw the criminal or believe someone is still inside your home or office, ring 999 and stress that the crime is in progress. If the intruder is long gone, then ring a non-emergency number for your local police authority. Stay on the telephone as long as necessary to provide descriptions of any suspicious persons or vehicles.

Don’t disturb anything until the police investigator gives you permission. The burglary scene often contains the only existing evidence of the crime. It can sometimes take quite a while before crime scene specialists arrive to process it. The presence of witnesses is rare; therefore, physical evidence will be crucial to the success of the investigation.

As quickly as possible, provide law enforcement officers with a full list of the property stolen in the burglary. Don’t count on the offender being caught instantly after departing your home with the loot still in hand. If property is later found in a burglary suspect’s possession, the police won’t be able to prove it belongs to you if it’s not adequately described in your crime report. Items that are mass-produced typically cannot be traced and returned to you unless you can identify each of them by make, model, and serial number or other unique markings.

The volume of stolen property recovered by the police is so large that an electronic database is likely to be employed in an attempt to match specific details in the report of your burglary with serial numbers on pawned or recovered items. If you can’t prove that stolen goods recovered by the police are yours, the items will eventually be sold at auction. Furthermore, the police routinely inspect businesses, legitimate and otherwise, that handle stolen property. The only way for them to identify your stolen belongings is by the serial number, or in the case of a truly unique item, with a detailed photograph.

Ask your local police where you might expect to find your possessions being resold. Visit the locations or view the websites. If you recognise your stolen belongings, quietly contact the police without tipping the seller and then follow the police investigator’s instructions.

If your identification, cheques, bank cards, passport, credit card statements, or financial records were stolen in the burglary, immediately notify the agency or business that issued each one. For detailed step-by-step instructions on reporting identity theft, refer to

Show the reporting officer everything that was damaged during the burglary. Property destruction is also part of the loss you’ll need to report to your insurer or include in a claim for compensation.

Without touching anything, help the police officers ascertain what the burglar might have handled while committing the crime. The officer will check to see whether latent fingerprints exist. Be alert for any unfamiliar items that may have been discarded by the offender. In the process of making a hasty exit, criminals sometimes leave behind cigarette butts, gloves, hats, tissues, blood spatters, drug paraphernalia, and even wallets that serve as evidence linking them to the crimes.

Advise the police investigator if there are any surveillance cameras in the vicinity of the crime scene.

Take the time to cooperate with the burglary investigation. Be honest about who was aware of the valuables you possessed and might have had a motive to steal them. If the investigator is unable to locate witnesses, ask your neighbours if they can help. Some people won’t provide information about a suspect until they’re asked.

Understand that efforts to locate and prosecute a burglar can take months or years. Don’t jeopardise the outcome of the case by refusing to promptly identify property, testify at a hearing or trial, or discuss the case with investigators. Remember to provide police and court officials with your new address and phone number, if you move after the crime occurs.

If you intend to request a monetary court award for damages, you’ll need to produce your own evidence such as receipts, records, photographs, video or audio recordings, and testimony of witnesses. The same forms of evidence are used to support an insurance claim. You can find more information in the articles Investigating a Civil Claim and Are You Eligible for Compensation?